A rope is strung at about waist height of the taller players. The tensioned rope in the game is an electric fence. All players stand on one side of the electric fence and have to get over the electric fence without touching it. If a:e player:in touches the fence, all must return to the start page.

Tip: You may help each other!

The following two variants are more for older people (13+) and last a bit longer (about 60 minutes):

Variation jailbreak: Ropes are stretched at different heights in a triangle or square. The group is in the middle and must get out by climbing between each of the ropes a certain number of people.

Variation spider’s web: A spider’s web is stretched out of strings. A certain number of people are allowed to climb through each hole in the spider’s web. The number can be marked with clothespins. When someone has climbed through the hole, a pin is taken away. 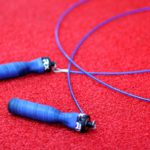 Stargate
A long (skipping or jump) rope is being swung round by two players. All players stand on one side of the rope. (Attention – Only one direction works). The goal is for all players to get through the Stargate, i.e. to run under the rope without touching it. If this is easy, the difficulty can... Stargate 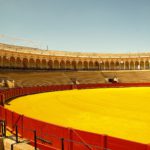 Arena
The rope is knotted into a big circle. All players line up on the rope and take it in their hands. The circle forms the bullring. A:e player: goes into the arena as a bull and tries to catch outside people by cutting their hands off the rope. Whoever is knocked off comes in the... Arena 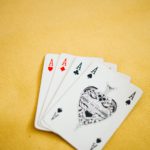 Chair sliding (according to card colours)
For this game either a classic card game is used or cards with different colors are prepared. The cards are counted on the number of players, so that of each suit (cross, heart, spade, checkere) there are the same number of cards in the pile. The cards are shuffled and each player draws a card.... Chair sliding (according to card colours)